Back to: Basic Grammar

There are '3' verbs which are given the name 'auxiliary verbs' in English.

This is because they are used to construct other types of sentences, tenses, and questions.

We will look at the verb 'DO' to begin with.

Do is a verb on its own and can be used as a main verb in a sentences. It has 3 forms

Do is also used to create Yes/No questions with a main verb.

Do you have a car?

Did she go to work yesterday?

Do is also used to create information questions.

Where do you go to school?

When did you last go to the cinema?

Why does she keep dating him?

Do is also used with certain tasks or activities.

To Do - General Use Verb

To do is used as the main verb when asking general questions about what happens, is happening, is going to happen, etc.

What are you doing?
What did you eat?
What have they done?
What do you do on Saturdays?
etc.

Read the explanation of how to use the verb 'DO' when creating information questions. 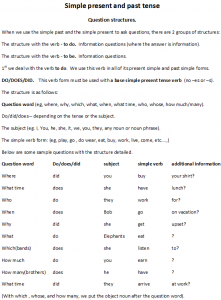 To Do usage chart

We will now look at the verb 'BE'. (Refer to the legend for the word type colours)

We use it to identify things, to talk about states, to make passive tenses,

to make continuous tenses, and more.

To identify things  -  "His name IS Bob"

To talk about states -  "The bank IS closed"

To make passive tenses -  Houses ARE built from bricks.

To make continuous tenses  -  He IS doing his homework.

To be is also used with adjectives when the form  Noun is Adjective   is used.

Bob and Jean are married.

We can also use 'be' in other forms:

They were in London last week.

Susan was eating lunch when she got a phone call.

Peter has been working here for 5 years.

If you need me I will be in the living room watching TV.

They said that they will have been married for 10 years on September 1st.

He should be at home now. Try his number.

Global warming can be reduced.

Something must be delaying him. He is never late for work.

Here are some worksheets to practice the verb structures.

Our final verb in this section is the verb HAVE.

Another 'flexible' verb, it is used in many situations.

To create 'the past tense'

To create 'possession' when used with nouns.

The verb have has three forms: has, have and had. The forms has and have are used in the present tense. Had is used in the past tense.

Use have when the subject is a plural noun. Have is also used with the pronouns I, we, they and you.

Use has when the subject is a singular noun or the third person singular pronoun (e.g. he, she, it).

As a primary auxiliary, have and its forms are used to show ideas such as possession, relationships, physical sensations etc.

As an auxiliary verb 'have' also has the following use.

As a modal verb with the particle 'to' - have to. (verb structure used is 'aux verb' > 'main verb'

This is to mean 'obligation'(no choice) We also use 'must' to express the same meaning.

In Korea, men have to do military service.

Everyone has to pay taxes.

To travel abroad you have to have a passport.

Use the following worksheet to practice using 'have to' & 'must' as modal verbs.

The other uses for have will be covered in other lessons.