Back to: Basic Grammar

This tense is often very confusing to speakers of other languages besides English.

In many languages the present tense is used and the time is added to indicate the past.

For example, in Chinese, the verb never changes regardless of the time.

Other languages have markers (Vietnamese is one such language).

In English, verbs are used mostly to set the time. Past present and future.  In this lesson we are going to look at The Past Simple Tense.

The 'past' is any time before we are speaking or before a specific time we are talking about.

A visual representation of 'the past' is seen above. It means 'before now'

We have verbs which represent different aspects of the past, but in this lesson we are only going to focus on the past simple.

When 'we', as native speakers learnt tenses, we learnt them in 'threes' so we are going to do the same with you.

Threes =  Present > Past Simple > Past Participle. 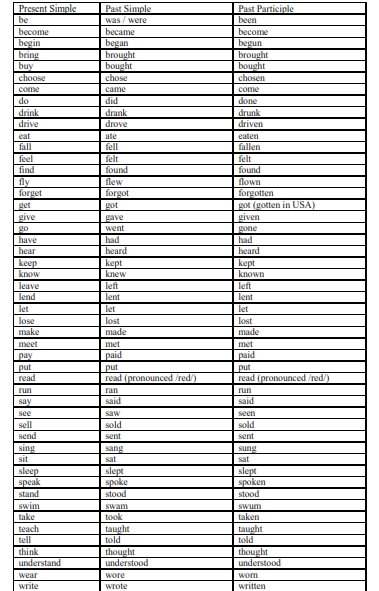 In the verb chart, the MIDDLE ROW is the row we are focusing on. 'The Past Simple'

The chart above shows only 'irregular verbs'. We are going to break this section into the two different types of past simple verbs.

These are verbs which do not have a regular pattern for the spelling. These are more difficult to learn because of this.

To show the indication of 'past time' we will do some examples.

( All of these sentences use 'irregular verbs')

All of the verbs in the sentences tell us that the actions happened in the past.

The only thing we do not know is 'when' they happened.

We can talk about things which happened in the past without 'time' but we more often use a 'time' indicator to say 'when' the things happened.

As an example, the sentence "Germany won The World Cup" has to have a time indicator because Germany have won the cup 4 times. So we don't know which time the speaker is talking about. So we add a time element to make it clearer.

"Germany won The World Cup in 2014"  so we know the action happened in the past, and we also know when.

The most important aspect is that the VERB shows the time (past present or future), any other information is to give a more accurate time, so the listener or reader knows exactly the time we are talking about.

If he went 10 years ago, why are you telling me now?

If he went yesterday is he still in Paris?

I he went 3 months ago when did he come back?

The listener would be thinking of all of these questions. This is because the information, although in the past, does not give enough information.

But we can also use the past tense where we do not need time added.

(Look at the legend in the contents for the colour indicators).

As you can see, the time is not important in these conversations.

These verbs are easier to learn because they all have the same ending.

The following sentences use 'regular' past simple verbs.

I waited for him for 2 hours.

Peter and his friends played football on Saturday.

They started saving for their holiday.

She married her boyfriend last year.

Here are 4 exercises to complete for the past simple tense.

Past Simple 'verb to be'

This is the end of the lesson.  Use this lesson to supplement your studies with your teacher.